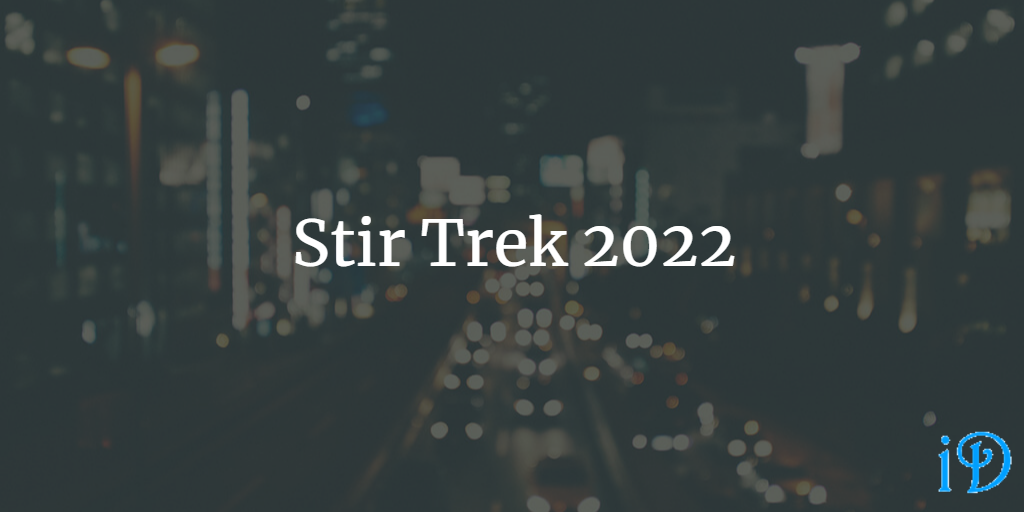 I had a ton of fun and learned a lot at Stir Trek this year! And experiencing the in-person conference was really cool after last year's virtual conference.

I went to a lot of interesting sessions this year, and my notes on the sessions are below. They're mostly for my own reference later, but others might find them useful, so I've shared them here. However, my notes do not do these amazing speakers justice!

This talk was an introduction to principles of unit testing and different ways to make code more testable, and testing difficult-to-test code. The unique framing of this topic in a medieval story of knights and kings and spies was extremely effective, and I learned a lot:

In this talk, Steve Smith gave an in-depth overview of clean architecture, starting with an explanation of the principles behind it, then going into the specifics of its implementation:

Where Has Jane Gone? - Karen Linden

This was the first of two talks I attended this year discussing the experience of women in the tech industry. This was a very engrossing presentation, so I didn't take many notes, but here are some of my key takeaways:

This talk discussed creating open source libraries and the many, many small but important components of such libraries, such as useful README files/documentation, licenses, robust .gitignore files, and of course the actual functionality of the library

I really enjoyed Stir Trek and learned a ton! It was also a really good experience for me to see just how much there is about software engineering that I had never thought about or never really understood. You don't know what you don't know.

Previously, I'd only associated Stir Trek with my dad getting to see all the Marvel movies before I did; I'm glad now to have had my own experience with it, though I was somewhat disappointed in the lack of Marvel movies. But that is, of course, more Covid's fault than Stir Trek's! Hopefully in the not-too-distant future, I'll get to attend a Stir Trek in person, Marvel movie and all.

This year, I was really excited to see Doctor Strange in the Multiverse of Madness on opening day, which was really cool, and it meant that I was able to watch the movie at the same time as my dad, rather than having to wait until after he saw it.

I hope I'll be able to attend Stir Trek next year, as it was a phenomenal experience, and I'd love to go again!