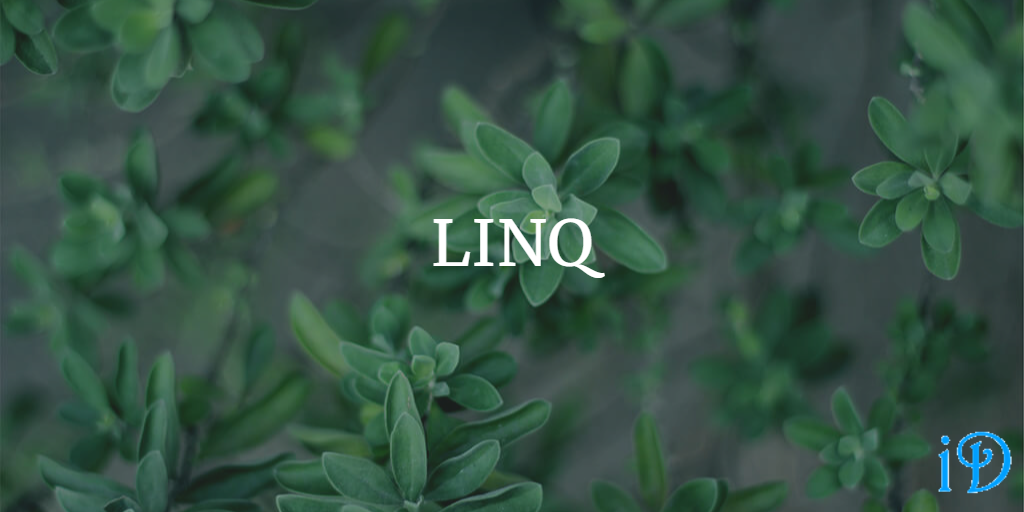 This post contains my notes from Essential LINQ by Charlie Calvert and Dinesh Kulkarni. Most example code comes directly from the book, and any prose taken from the book is in quotes.

What LINQ is - "The Essence of LINQ"

Collection initializers - not really part of LINQ but useful nevertheless. This line:

is the same as these lines:

A typical query expression in LINQ looks like this:

from is always at the beginning of a LINQ query, and the final line in a LINQ query always begins with either select or group. The where keyword tells the compiler which numbers are desired; in this case, those less than 3. LINQ has many operators, but the from-where-select structure is the most commonly used in LINQ queries.

It is important that the from clause come first and the select clause last in order that the IDE and compiler can provide feedback based on the type of data being queried (which is established in the from clause).

Type inference means using the keyword var to define the query, instead of declaring it as, for example, IEnumerable<int>. Type inference is the preferred style in order to enforce strong typing, allow LINQ to take advantage of composability, in addition to several other benefits.

Anonymous types - when LINQ queries a collection of objects with the new keyword following select, an anonymous type is created. This is a simple class containing only the properties being queried. This anonymous type will be the type of the output of the query. It will have an automatically generated ToString() method that can format the output when printed. At a more basic level, anonymous types are read-only classes used when an object's type cannot be known at compile time.

Entity classes are classes that map directly to a database table. Classes are declared entity classes via the Table attribute above the class declaration:

Delegates declare variables that reference a single method. The delegate type must have the same signature (output type, number of parameters, parameter type(s)) as the method it references. Generic delegates are a more flexible form of delegates, where the output and parameter types can be declared later.

Lambdas provide a simple syntax for declaring delegates, particularly when working with LINQ. The => found in a lambda expression is generally read as "goes to." A lambda declaration like this:

is roughly equivalent to this delegate declaration:

Seven types of clauses exist in LINQ: from, let, where, orderby, join, select, and group-by.

Sometimes a group-by clause may appear in the middle of a query. This creates a divide in the query; range variables from one side of the query cannot cross this divide to the other side of the query.

While the select clause simply outputs all members of the data source (aside from those filtered out by other clauses in the query), the group-by clause does the same thing but avoids repeating elements which share a certain key. For example:

Now, this code prints "cat" only once, even though there are two cats in the list.

computation or result sequence - the result of a LINQ query

projection - the part following select in a select clause

A range variable's type can be explicitly declared when necessary, but this should be avoided.

Essentially, LINQ provides a means of accessing SQL from C# (or another language that supports LINQ) and gives the benefits of object-oriented programming and strong typing to SQL queries. Thus, C# developers need not embed their SQL queries in string literals.